Flights from UK can be found HERE 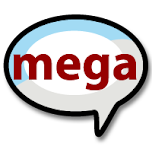 Info can be found HERE. There is also a map on PDF HERE

Info regarding Metro and Trams can be found HERE

Posted by Basketcase Crew at 18:15 No comments:


First trip of the year and one where Ian went solo.

The flight was from Birmingham with Wizz Air for 3 nights.

I stayed at Play apartments with 3 nights costing 100 Euros, I met the landlord Dennis at the property and then took a quick shower before heading out for a beer.

Next I moved on to Brewdog where I was actually disappointed, not with the staff or place but with how quiet it was. I had a nice Stout and then visited Szimpla Kert on way back.

Szimpla Kert is a wonderful Ruin Bar, a place I have visited before with Kate and Ben. I had one drink of First IPA which was average and then called it a night.

I had a bit of a lie in today due to a late night but was still out by 9am. I took a nearby bus to Margaret Island which was a lovely location away from hustle and bustle. I completed a wherigo there and enjoyed views down the Danube river.


NLC # Deluxe - TB Hotel
Next I walked back over the Danube to look for a geocache which was in top ten of most fave points within the city. It was in a Jazz club so I ordered myself a cappuchino and asked for the geocache.
It was a field puzzle but the instructions helped to get it open.

I carried on walking as next I wanted to visit Tommy Ramones birthplace. I have always liked the Ramones so didn't want to miss this opportunity as we have already visited Johnny Ramones grave near New York.

After reading the plaque at his birthplace I checked to see what caches were close by and I was 100ft from a reverse wherigo..... how about that for luck.
I crossed over road and made a quick find.

Next up I wanted to visit the Shoes on the Danube memorial so headed that way taking in a couple of caches on route.


The Shoes on the Danube is a memorial to the jews who were shot into the Danube  during World War 2.

After reflecting on such a terrible act I found the geocache and then moved on to another one with high Fave points.

GBGA-05 - Hungarian Academy of Sciences
This was brilliantly done as it was in plain sight once at the right location.

I finished off the walk with a pic at the Hard Rock cafe and then a Virtual geocache.


I then headed back to apartment for a relax and shower before heading out for dinner.

The apartment was basic but good for what I wanted and was located next to Budapest Museum. The location was perfect really as it was in between Kalvin Ter and Astoria Metro stations.

After freshening up I took the metro to a Belgian beer bar I had spotted earlier in the day. It was more of a restaurant but I did enjoy having a Chimay Blue there.

I decided to move on as I was getting hungry and there was a great looking place not far away.

Hedon Bazilika Taproom is a Beer Hall and had over 30 beers available. The concept is to obtain a card on entrance and then it gets charged as you pour beer and then you settle up at end of night.It is a great idea as you can just have a taste of a beer and choose the one you like the most.

I also had a fantastic beef steak sandwich here.

I enjoyed my time at this bar but decided to head into the Jewish Quarter as it was nearer to my apartment. I had a quick drink there before retiring to bed.

Today my target was to find 3 old Virtual caches. When we were last here in February 2017 we didn't have enough time to find them.

Wekerle apartment park
This is an April 2002 Virtual in the suburbs of Pest. Set on a lovely estate, there are 3 locations you have to visit.

Guardtower
A watchtower put in place in 1844 to stop thieving from the vineyards.

Small Svábhill (Kis Svábhegy)
This had a physical container to it and some fab views.

I used buses and trams to get to all 3 caches without any problems at all. My fave cache of the 3 was the last one. It was an easy hill to climb with some great views.

I returned to apartment after for a shower and change of clothes and then went to a nearby Irish bar to watch Aston Villa take on Manchester City in Premier league.... I left just before half time when Manchester City were winning 3-0. I thought there are better things to do in Budapest sitting in a crappy Irish bar watching my team get hammered haha. Final score was 6-1.

I moved on to a nearby Craft beer bar called Beer Brothers. The beers were great but only disappointment was that the first 2 beers of my choice had just finished.

Finally and to top off the night I went to First Local Craft Beer and Kitchen which was great however most people in there were couples so nobody to chat to.

There are some really nice craft beer bars in Budapest and unfortunately this was last one of trip as the flight home was tomorrow.

I had to check out at Noon so decided on a bit of a lie in and then a bus across city to get one last Virtual Reward.

Neumann János
A statue of a great Mathematician.

To log the cache you had to take a pic in front of the statue.

That was the last of things to do in Budapest as it was time to check out and take bus back to airport. 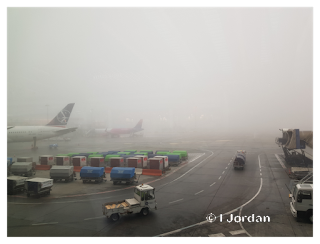 Posted by Basketcase Crew at 20:39 No comments:


We have been to Luxembourg a few times now but have never stopped for more than a couple of nights, this time however we stayed for 6 nights.

We took the 4pm shuttle to France and then stayed the night at the Lemon Hotel in Arques, we have stayed here a few times now as it is so cheap but very basic.

We popped into St. Omer for dinner and for one drink. It was nice to revisit this nice town. 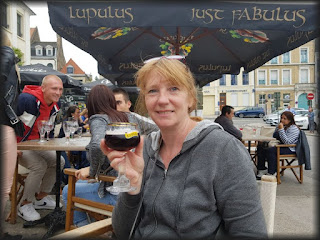 After a good nights sleep we headed off to Luxembourg, unfortunately as we got further into Belgium we drove through very heavy rain which made driving hazardous.

We stopped off in L'eglise to do some Geocaching and picked up just over 30 drive by's, we then gave up as the rain came again.

At around 4pm we arrived at Camping Birkelt, our base for the next 6 nights and thankfully we managed to pitch our tent and remain dry.

We stayed on campsite for the rest of the day and enjoyed a beer at the bar. 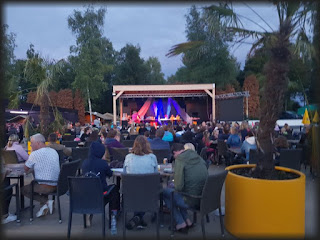 A sunny start to the day so we went to visit Orval Abbey where they brew a Trappist beer.
It was just over a hours drive away back in Belgium and close to French border.

The abbey was very picturesque and had a brewery shop where we picked up a box of ten beers and a chalice for just 20 euros.


We enjoyed a Virtual and a traditional geocache at the abbey and then did a few drive by's just down the road and taking us into France.

We drove past Basilique Notre-Dame d'Avioth and just had to stop and take a look around. We are so glad we did as it is a beautiful cathedral. 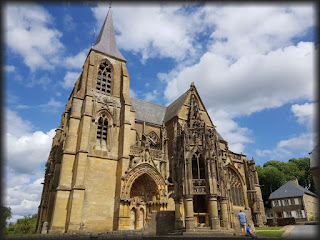 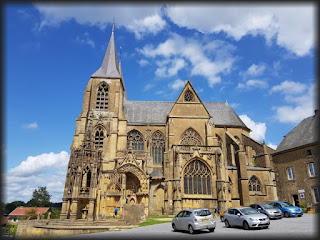 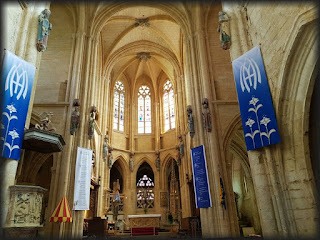 We did a few more caches and then headed back into Luxembourg picking up a late lunch and a bit of shopping on route back to the campsite.

On the evening we took a walk into Larochette, we had a drink there but didn't stay long as the town was very quiet.

Another nice day and today we are off to do a Lab Cache adventure in Echternach.

The adventure was good but I didn't like that you had to do them in order rather than being able to do the closest one to you, still it only took a hour and we enjoyed it.

We also grabbed a couple of virtual reward caches in the town.

We enjoyed a nice kebab for lunch and then headed off to do some cave caches.

Just a few minutes drive near Berdorf we had picked 3 cave caches to do, we found 2 but failed to find the 3rd one but what a beautiful area we will have to return to again.

The caches were The secret place, Reiberhiel and Hölle which are all worth doing.

Back to the campsite now for a relaxed evening.

Today, we spent grabbing Virtual Reward caches that were scattered round and also a fab lost place cache.

It was a house where it looked like time had stopped but all the furniture was still in place. We are not sure of the circumstances of the occupants but it was strange to see how it had been left. There was newspapers on the tables from 1994. 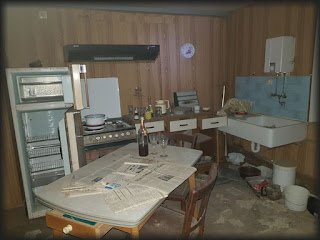 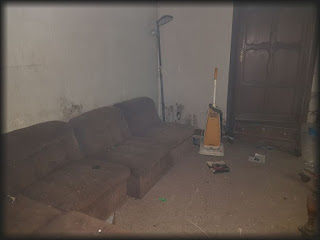 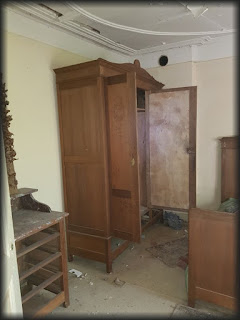 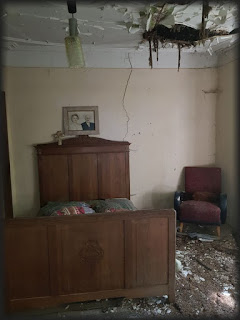 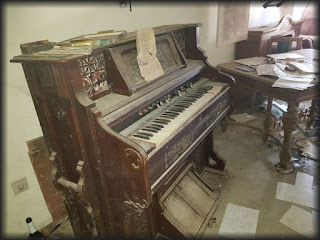 We carried on with the Virtual reward caches and ending up at La Chouffe brewery. There was a VR nearby so it mean't we got to visit the shop too.

Another couple of Virtuals on route to our campsite and another relaxing evening there planning the next day.

A beautiful start to the day and it got up to 30 degrees. Today we walked off site to the bus stop and caught the bus to Mersch and then the train to Luxembourg city. An all day transport ticket cost us 4 euros each and it was free for Ben.

This is our first visit to the capital and it won't be our last. Kate and I wondered round together while Ben had a look round on his own so escaped geocaching. 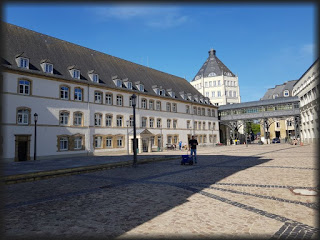 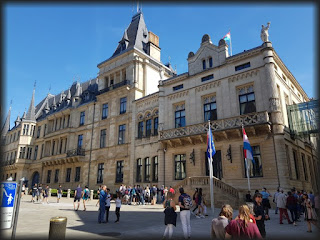 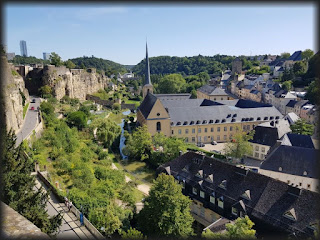 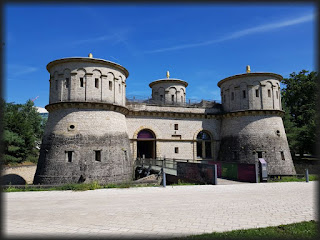 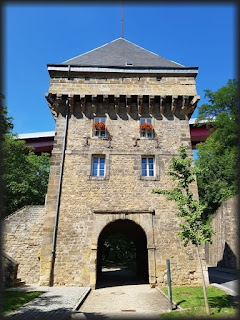 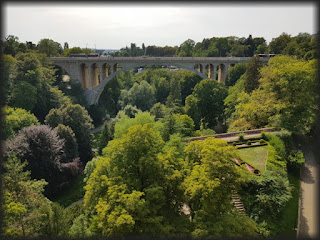 We did quite a few VR caches and also a couple of traditionals before meeting up with Ben at McDonalds.

We thoroughly enjoyed the city despite it being a little too hot for us.

This was a free day for us so we spent the majority of it on site making use of the indoor and outdoor pools. A great way to spend our final day too.

We managed to pack a dry tent as it was another scorcher today, we then headed back slowly to Northern France stopping off at Noel Cuvelier beer shop and then visiting In der Vrede and Bar Bernard.

Then it was off to the Lemon hotel again for an overnight stay and an uneventful drive home.
Posted by Basketcase Crew at 21:51 No comments:

Basketcase Crew
Thank you and welcome to our blog. We are Ian, Kate & Ben aka Basketcase Crew, our Geocaching name. We like many different aspects of Geocaching but nice walks together as a family is our favourite. We have finished many challenges we have set ourselves and thrived in each others company. We love to travel around the UK, Europe and of course Canada and the US.